Amjad is an Action for Equality graduate. In the past Amjad fought often with this family and was particularly unsupportive of his mother, quick to defy and generally unhappy at home. His parents described him as selfish and concerned only with his school and social life.

AfE has given him a new direction in his life and enabled him to be compassionate and sensitive to the needs of his family. He has been helping his mother with the housework and is encouraging his friends to do the same.

16-year-old Omkar Pawar, a student of First Year of Diploma in Industrial Training, has been a part of Equal Community Foundation’s Action for Equality Programme for the last two and a half years. His community in Lohianagar is one of the low-income communities in Pune that ECF works with, and used to be a place where violence and discrimination against women were a part and parcel of everyday life. In the two and a half years of his journey with ECF’s Action for Equality Programme, Omkar has come a long way as a young man.  “I never actively thought about the role of women in my life before I joined the Action for Equality Programme. It was only when I joined the programme that I looked around me and realized the extent of injustice they experience in day to day lives- simply because they are women.”

After successfully completing the Foundation Programme and Action Programme, Omkar is now part of the Action for Equality Leadership Programme.As a volunteer leader, Omkar meets 52 other young leaders from 20 low-income communities around Pune weekly to discuss issues that affect their communities and to plan collective action to address them. Omkar recounts one incident where a woman sought his help for standing up against abusive in-laws. “Along with a few other leaders, I’d performed a street play in one of the communities in Pune. We were hoping to raise awareness about the ‘Protection of Women from Domestic Violence Act, 2005’ and the rights it gave women to seek redressal if they faced violence at home. After seeing our performance, one woman from the same community approached us and confessed that her husband and in-laws were physically assaulting her. With the help of our mentor, Yogesh Kamble, we advised her on how to file a complaint against her in-laws. Over the period of time, her in-laws were sentenced to one year in jail and gradually stopped harassing her. Today, even though her sons are much younger than the programme’s age limit of 13 years, she wants to ensure that they learn about violence and discrimination in ECF’s sessions.” 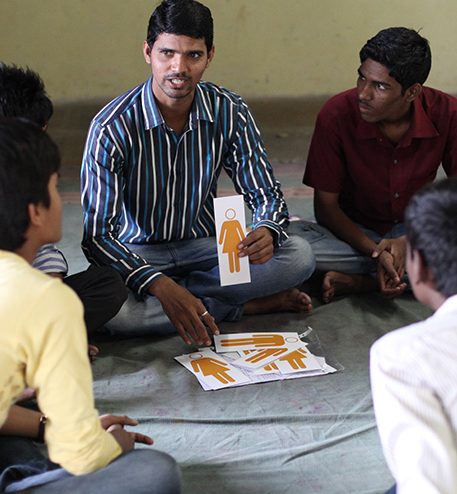 I have observed a change in my son. Now he supports me in all the household chores and other work so I am happy to send my son to such programs. This promotes good behaviour for him, and I suggested my neighbours should involve their boys in the same activity.

← BACK TO PROJECTS
Donate

For subscribing to our newsletter